Hecto: Build your own text editor in Rust 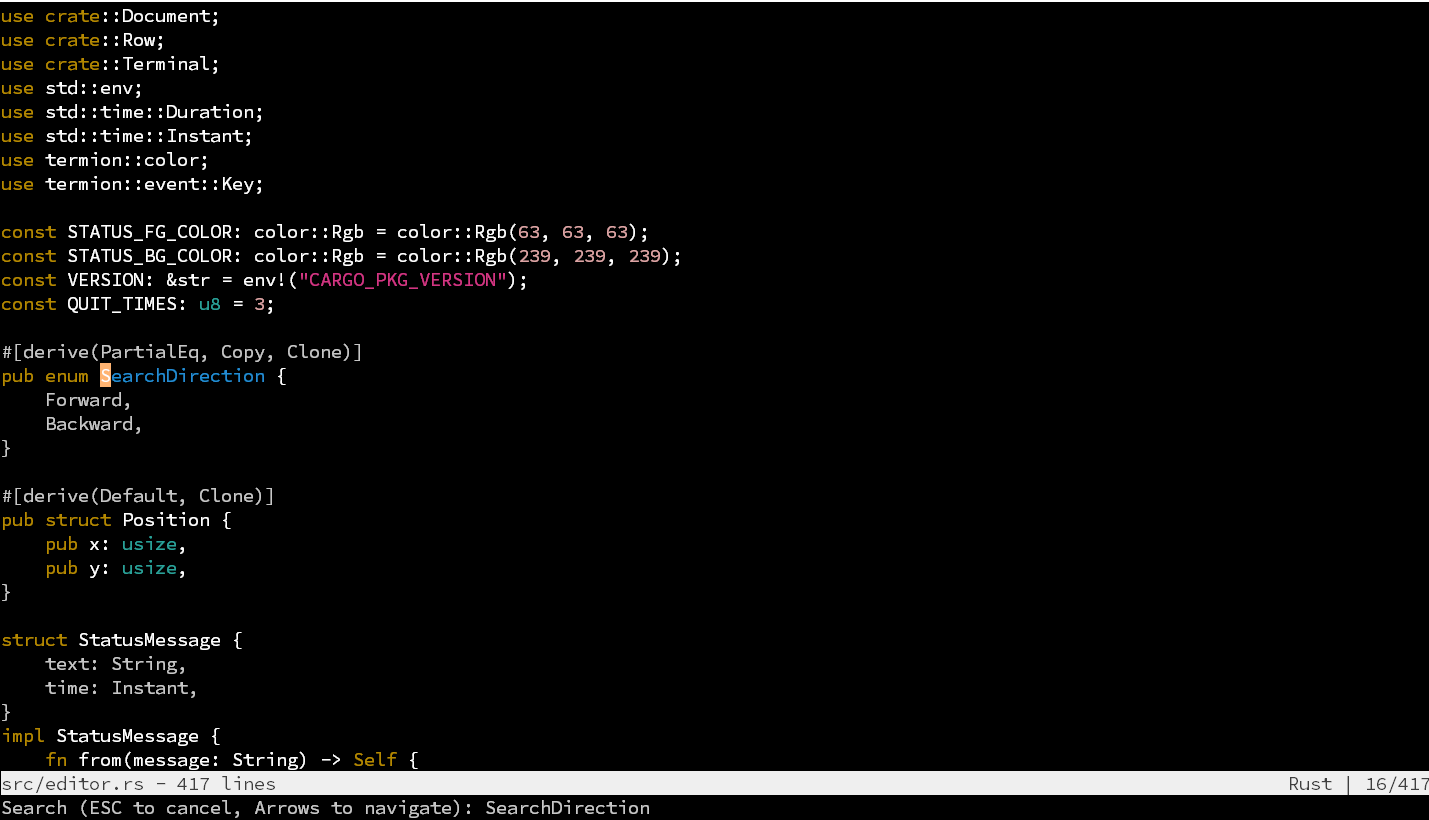 This is a series of blog posts that shows you how to build a text editor in Rust. It’s a re-implementation of kilo in Rust, as outlined in this fantastic tutorial. Same as the original booklet, these blog posts guide you through all the steps to build a basic text editor, hecto.

You will almost always be able to see your changes in action by applying the changes, saving and running the program. I will explain every step along the way as best as I can - sometimes in great detail, and often linking to other pages. Feel free to skim over the prose and ignore the links, there is plenty to learn just by applying the code changes and watching your text editor grow!

I have always thought that every software engineer needs to have more than superficial knowledge of at least two programming languages. However, I have to admit, that in the past few years, my knowledge in pretty much everything except JavaScript has started to fade.

That’s why I started to learn Rust, and I have re-implemented kilo as a learning experience. But why? In order to learn Rust, I wanted to re-implement a well-understood piece of software, so that I could focus on the language without getting lost in the implementation details. But I did not want to re-implement stuff I used JavaScript for, as I think that JavaScript is designed for a different problem space than Rust. Or in other words: If you are a plumber, you best learn how to use an axe by using it to chop down some trees, and not to unclog a sink.

kilo is complex enough to pose a challenge, and when I read it, I wished it was available for Rust - and now it is!

And why the name? hecto follows more modest goals than kilo. It does not aim to be small, and it wasn’t even my own idea - so it seemed appropriate to give it a more modest name than its spiritual predecessor.

While these blog posts are based firmly on the original tutorial, the code has been adapted to Rust, not only by calling the closest “rust counterpart function”, but by trying to solve things “the rust way”. Similarily, all explanations have been checked and revised, and in many cases heavily rewritten, in the context of Rust. Therefore, this tutorial should be seen as a “rust remix” of the original C version.

I’m happy that you read my work and would love to hear from you - especially if you are either stuck or have found a better way to solve specific things. Keep in mind that this is mostly an exercise for me to get to know Rust - so if there’s a better way to do things, please reach out!

It has been a few years since I wrote this tutorial, and a lot has changed in the Rust world ever since. This means that the code described in this tutorial might no longer work, it might produce warnings or errors which haven’t been there when I first wrote this tutorial.
People are still highlighting bugs to me or support with pull requests fixing these issues - however, I don’t have the bandwidth to update all code samples in this tutorial.
Whereever it makes sense, I am updating at least the text of the tutorial with pointers and hints so that with some effort, you should be able to complete the tutorial.