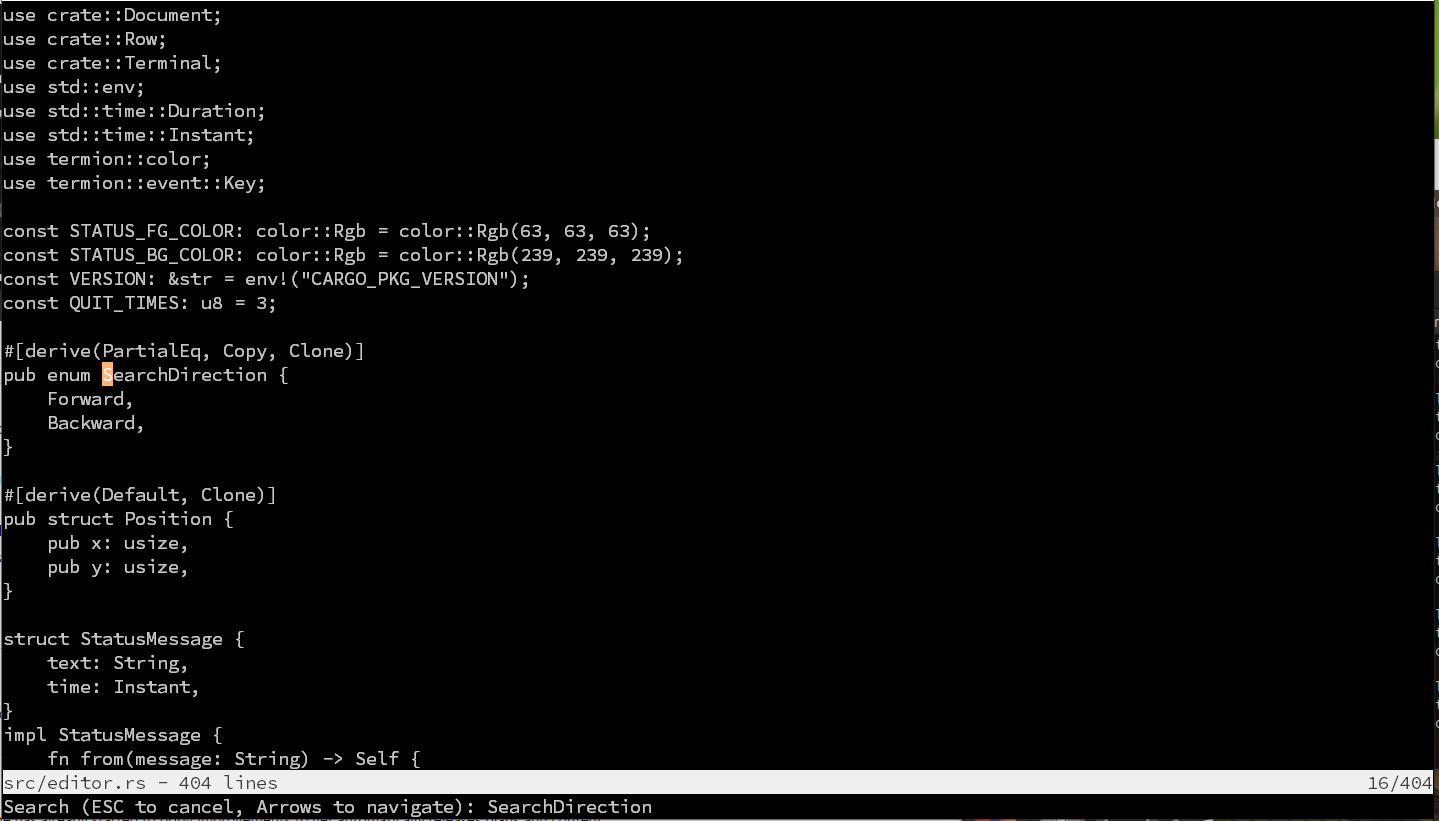 Our text editor is done - we can open, edit and save files. The upcoming two features add more functionality to it. In this chapter, we will implement a minimal search feature.

For that, we reuse prompt(). When the user types a search query and presses Enter, we’ll loop through all the rows of our file, and if a row contains their query string, we’ll move the cursor to match. For that, we are going to need a method which searches a single Row and returns the position of the match. Let’s start with that now.

Let’s go through this change starting at Row. We have added a function which returns an Option, which contains either the x position of the match or None. We then use the find method of String to retrieve the byte index of the match. Remember that this might not be the same as the index of the grapheme! To convert the byte index into the grapheme index, we use a slightly convoluted loop. Let’s unravel that one.

grapheme_indices() returns an iterator over a pair of (byte_index, grapheme) for each grapheme in the string. enumerate() enumerates the iterator, so it gives us the grapheme index of each entry of the iterator.

We take this to our advantage and use the iterator until we arrive at the grapheme with the same byte index as our match, and return the corresponding grapheme index.

In Editor, we use a very similar logic as before around prompt. We retrieve the search query from the user and pass it to find. If we find a match, we move our cursor. If we don’t, we display a message to the user.

Last but not least, we also modify our initial welcome message for the user, so that they know how to use our new search functionality.

Now, let’s make our search feature fancy. We want to support incremental search, meaning the file is searched after each key press when the user is typing in their search query.

To implement this, we’re going to get prompt to take a callback function as an argument. We’ll have to call this function after each key press, passing the current search query inputted by the user and the last key they pressed. I’ll explain the concept in a bit.

We are using a new concept here called closures. It comes with a new bit of syntax, which makes this code a bit hard to read.

Let’s start with the concept. What we want is to pass a function to prompt, and we want this function to be called every time the user has modified his query. We want this so that we can perform a search on the partial query while the user is typing.

How do we do that? First, we need to modify the signature for prompt. It now looks like this:

The initial <C> comes from the concept of Traits. We won’t be implementing any complex traits in the scope of this tutorial, so you won’t be seeing this syntax anywhere else. Essentially, the C is a placeholder for the callback, and you can see it repeated as the type for the parameter callback. Another new thing is the where at the end of the method definition, and this is where we define what kind of function C should be. It should essentially take three parameters: The Editor, the Key which has been pressed (we ignore it for now, but we are going to use it later), and a &String, which will be the (partial) search query. We can see callback being called with these parameters after the user has pressed a key.

How do we define a callback? Well, we can see the easiest case in the prompt for save: |_, _, _| {}. This is a closure which takes three parameters, ignores all of them and does nothing.

A more meaningful example is the addition to our Search-Prompt: Here, the closure takes three parameters (ignoring the middle parameter) and actually does something. As it’s called with every partial query, we are performing a search and setting the cursor with every key press.

Maybe you are familiar with closures in other languages, and you might ask yourself: Can’t we just access self directly within the closure, instead of passing it to prompt and then to the callback?

Well, yes and no. Yes, because a major feature of closures is that they allow you to access variables from outside of the closure definition, but no, because that does not work in this case.

That’s all there is to it. We now have incremental search.

If the user cancels his search, we want to reset the cursor to the old position. For that, we are going to save the position before we start the prompt, and we check the return value. If it’s `None´, the user has cancelled his query, and we want to restore his old cursor position and scroll to it.

To clone the old position, we derive the Clone trait. This allows us to clone all values of the Position struct by calling clone.

We start by accepting a start position in our find methods, indicating that we want to search the next match after that position. For row, this means that we skip everything in the string up until after before performing find. We need to add after to the grapheme index of the match, since the grapheme index indicates the position in the substring without the first part of the string.

In Document, we are now skipping the first y rows when performing the search. We then try to find a match in the current row with the current x position. If we can’t find anything, we proceed to the next line, but we set x to 0 there, to make sure we start looking from the start of the next row.

We have adjusted our error message and are calling find now with the cursor position. We are also now using the formerly unused key parameter of our closure and match against the user input. If the user presses down or right, we are moving the cursor to the right as well before continuing the search with the updated parameter. Why? Because if our cursor is already at the position of a search match, we don’t want the current position to be returned to us, so we start one step to the left of the current position. In case our find did not return a match, we want the cursor to stay on its previous position. So we track if we have moved the cursor in moved and move it back in case there is no result.

That is quite a big change for something that should just be the opposite of what we just implemented!

Let’s unravel the change step by step, starting at Row.

We have renamed after to at, since we are not necessarily looking at something after, but also before the given index. We are then calculating the size of our substring which we want to search based on the search direction: Either we want to search from the beginning to our current position, or from our current position to the end of the row. Once we have the right length, we use an iterator to collect our actual substring into a string. We allow integer arithmetics here since we have made sure that end is always bigger than or equal to start, and always smaller than or equal to the length of the current row.

You can see an enum in action: SearchDirection. We will see its definition in a bit. For now, we use it to determine whether or not we should find the first ocurrence in a given string, with find, or the last, with rfind. This ensures that we are finding matches in the correct direction.

In Document, we are building our own iterator, since depending on the search direction we either need to search forward or backward through the document.

We determine the range of rows through which we will be iterating based on the search direction, and then we perform the search. Same as before: If we have a match, then we can return the position we are currently on. If not, we have to set y to the next or previous row, and have to set x either to 0, in case we are searching forward, or to the length of the previous line, in case we are searching backwards.

In editor, you can see the definition of our new struct, SearchDirection. It derives Copy and Clone, which allows it to be passed around (the structure is small enough that copying it instead of passing a reference does not really matter), and PartialEq ensures that we can actually compare two search directions to one another.

Note that we also set the direction to forward again on any other keypress. If we wouldn’t do that, the search behavior would be weird: Let’s say the cursor is on baz of foo bar baz, the user has entered b and the Search Direction is backward. If you typed a, the query would be ba and the user would jump back to bar instead of staying on baz, even though baz also matches the query.

We have also removed the final search and the “Not found” message in case the user cancels the search. We are already searching within the closure, so an additional search at the end does not bring us any benefit.

Last but not least, we needed to update the signature for our callback (and thus, for prompt), so that callback is able to modify variables accessed within it. That’s being done by changing callback to FnMut.

Since our functionality is now complete, we used this chapter again to focus a bit more on Rust topics and brushed the topic of Closures and Traits. Our editor is almost complete - in the next chapter, we are going to implement Syntax Highlighting and File Type Detection, to complete our text editor.